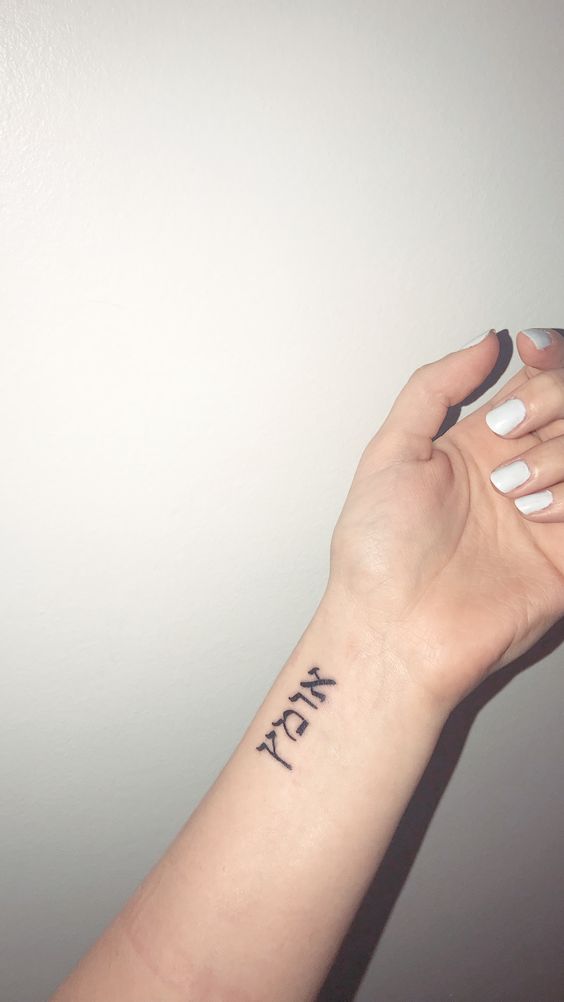 Thinking Of a Unique Tattoo

It is not uncommon for tattoo enthusiasts to seek a new experience after trying different concepts. However, some of the selections on offer are quite weird and might give the impression of deviance.

So, why not try a modest yet unique concept that blends with the mainstream trends while preserving your sense of identity and expression? Why not consider a Tattoo in Hebrew?

Why get a tattoo in Hebrew

Hebrew is an ancient Middle Eastern language that has been the preserve of the Jewish community for several years though several other people speak the language.

Just like Arabic, Jewish calligraphy is elegant and stylish and appears exotic and is a far cry from the vulgar tattoos that some people opt for in order to project their identity.

Typically, Hebrew calligraphy runs from right to left unlike English and other European languages that run from left to right. It is advisable for anybody who is seeking a Tattoo in Hebrew to be affiliated with a translator.

A translator will assist with Hebrew Tattoo translation and also offer tattoo options that fit with one’s character.

Associating with a translator is important as most tattoo artists do not understand Hebrew Tattoo  and could easily design the calligraphy running in the wrong direction.

This can be mortifying especially if one is to encounter Hebrew speakers. The tattoo would make the bearer a laughing stock among such people and could force one to conceal it.

Now, no one wants to invest so much money for a unique tattoo only to be forced to conceal it due to poorly designed calligraphy. What’s more, the cost of having it removed and replaced with the right style can be prohibitive.

This is why one ought to consult a Hebrew Tattoo translator before having it designed.

Do not fall for the temptation to copy a beautiful design on the web and rush it to your designer for designing without even understanding its meaning.

All clients need to do is to copy the design and send it to them for scrutiny and suggestions before presenting it to the designer.

They will explain its meanings and offer suggestions for alterations and formatting.

This is because Hebrew  Tattoo alphabet looks awkward when written along the wrong direction. The support at Hebrew Tattoo consists of translators, who will help translate your Tattoo into Hebrew and set up the characters for you. Moreover, they give clients 50 different fonts for design so that clients can choose the style that suits them.

Their rates are relatively low with one word going for only $6.99 and $9.99 when one includes a nikud. They also help clients choose phrases and verses that represent their wishes or philosophies. All the consultation for verses and phrases is free and ensures that clients get the right option before paying for the design. Overall, Hebrew Tattoo is offering a unique service that is going to excite many tattoo enthusiasts.

What you get from us?

•Professional and courteous service
•You do not pay before we can guarantee a perfect service!•An accurate translation
•Your choice of a beautiful design
•Huge selection of font choices
•Extra speedy service

How our service works?

Very simply, you decide to do  tattoo in Hebrew, excellent!
Tell us the words or phrase you want translated and we will tell you if they would actually translate into Hebrew correctly.
Free initial consultation service! Once we agree on the wording you can select the font type you want it (without limitation) from the font catalog you will be sent.
Finally you will get from us a pdf with clear instructions on which direction the wording should run in, horizontally and vertically. you can enlarge the pdf file to any size you want, print it and go to you

WE HAVE THE LARGEST FONT
OFFERINGS IN HEBREW TATTOO

Apart from our very personal service where we discuss and clarify your exact needs with you, you will receive a PDF file with your phrase in a selection of over 50 different fonts and styles to choose from.
These include some cursive / written styles, to which nikud are not applied.  You can then choose your favourite style.

We will also provide you with instructions to how to make the tattoo run vertically in that final file if this is required (in the way that we recommend).  We believe that we offer the largest range of Hebrew tattoo  fonts and styles on the internet, and that our uniquely personal service ensures that you receive a completely accurate translation.

We like to think that we offer more peace of mind than other
sites.

We have the largest font offerings in Hebrew tattoo
We can provide you with dozens of font and style options, not just one or two. Why have a Hebrew tattoo in the same font as everybody else? Our many options mean that you can choose a style that you feel suits you best. We have over 150 for you to choose from.

We will supply your chosen word / phrase in ‘outline’ lettering (which your tattooist may require) and if requested, will also include vertical directions, make your text run in a circle or an arch, and all of this at no extra cost – other websites charge extra for this.

We enable our customers the option of including the HebrewTattoo translation nikud no extra charge.
Nikud (or Niqqud), basically, are the dots and dashes around Hebrew Tattoo letters that tell the reader how each consonant should be pronounced, since Hebrew doesn’t have vowels the way English does.
However, nikud is not necessary in Hebrew text and is most commonly written without it in modern days. The only places where nikud is still widely used is in biblical texts, poetry, and children’s books.
So the decision on whether or not to have it is often purely aesthetic, and many people choose to have it simply because they think it looks nice.
You can see examples of texts with and without nikud here and in our gallery.
Occasionally, it may be more appropriate to have nikud applied to a word, for example
if the word can have different meaning depending on pronunciation. We will be happy to advise you if this is the case.
In Hebrew orthography, niqqud or nikkud (Hebrew: נִקּוּד, Modern nikud, Tiberian niqqûḏ; “dotting, pointing” or Hebrew: נְקֻדּוֹת, Modern nekudot, Tiberian nəquddôṯ; “dots”) is a system of diacritical signs used to represent vowels or distinguish between alternative pronunciations of letters of the Hebrew alphabet. Several such diacritical systems were developed in the Early Middle Ages. The most widespread system, and the only one still used to a significant degree today, was created by the Masoretes of Tiberias in the second half of the first millennium AD in the Land of Israel (see Masoretic Text, Tiberian Hebrew). Text written with niqqud is called ktiv menuqad.

Niqqud marks are small compared to consonants, so they can be added without retranscribing texts whose writers did not anticipate them.

In modern Israeli orthography niqqud is seldom used, except in specialised texts such as dictionaries, poetry, or texts for children or for new immigrants. For purposes of disambiguation, a system of spelling without niqqud, known in Hebrew as ktiv maleh (כתיב מלא‎, literally “full spelling”) has developed. This was formally standardised in the Rules for Spelling without Niqqud (כללי הכתיב חסר הניקוד‎) enacted by the Academy of the Hebrew Language in 1996.

One reason for the lesser use of niqqud is that it no longer reflects the current pronunciation. In modern Hebrew, tzere is pronounced the same as segol, although they were distinct in Tiberian Hebrew, and also pataḥ makes the same sound as a qamatz. To the younger generation of native Hebrew speakers, these distinctions seem arbitrary and meaningless; on the other hand, Hebrew language purists have rejected out of hand the idea of changing the basics of niqqud and fitting them to the current pronunciation – with the result that in practice niqqud is increasingly going out of use.

Tell us the words or phrase you want translated and we will tell you if they would actually translate into Hebrew correctly.

We will then discuss your requirements with you, agree on the price and you will make a payment via PayPal, based on the tariff below.

When you purchase our service, we offer you the following:

Direct e-mail contact with us, where we will clarify your exact requirements.
Advice from a native Hebrew speaker on how well your chosen words / phrase translates into Hebrew (we have seen many unsuccesful attempts at turning a well known English phrase into Hebrew).
A PDF file showing your translation in over 65 different fonts, in printed and written forms, as well as Rashi script and Te’amim (where applicable). You can then inform us which ones you want your word / phrase in.
There is no limit to the number of fonts you can choose.

Clear instructions on which direction the wording should run in, horizontally and vertically. If you need your tattoo to run in a circle or waves or any other special direction, let us know and we will arrange this for you free of charge.
A PDF file with the final version of your chosen word / phrase, in your chosen font, including an outline version that will be used by your tattoo artist as a stencil.

$5.00 per word in Hebrew, without nikud.
Nikud are the dots and dashes around Hebrew letters that indicate how a word is pronounced. They are not necessary, however they can make words and phrases appear more poetic or biblical to a native reader.
$7.00 per word in Hebrew, with nikud.
We charge a bit extra for nikud because it really is extra work for us.
Nikud is not intuitional. In order to get it right we must check dictionaries and other books so you get the most accurate translation possible.
Max Price – $50.00.
No matter how long the sentence you want translated is, with or without nikud, you won’t pay more than $50 per phrases.
Note that this only applies to long phrases and not to several separate requests done by one person.
$3.00 for an MP3 Recording of your translation.
For those of you who want to know how to pronounce the text on your tattoo accurately, we now offer an MP3 file with a recording of your text said out loud for you to hear.
For people who did not purchase their translation from us this service costs $5.00.
You can be assured of a prompt and friendly service.
Please check out our FAQ page should you have any queries.

Once you know how many words your translation will be, you can proceed to the Order page for checkout.